Darlyne Hilaire Destin was born in Port-au-Prince, Haiti, on September 22nd, 1970. Her mother, Marie-Rose Hilaire, worked at a factory as a seamstress, while her father Leo Felix, was a businessman. At a very early age, Darlyne demonstrated a level of thoughtfulness, responsibility, wisdom, and kindness far beyond her years. With both parents frequently away from home due to their work schedules, she assumed both fatherly and motherly duties towards her two younger siblings, ensuring that they were always adequately cared for. This genuine selflessness eventually compelled her to unofficially adopt her 2 year-old cousin, raising her as her own daughter over the years.

At the age of 18, nudged by her entrepreneurial inclinations, she founded a vocational school specializing in culinary, cosmetological, and textile arts, attracting an inaugural class so large that she had to immediately move the business to its first formal headquarters in one of the capital's busiest commercial centers. While working on her bachelors, she led the business through a series of expansion that saw the addition of a few branches around the capital, as well as the formal creation of a catering business that secured hundreds of domestic and international contracts within a few years of inception.
At the age of 24, she married Pierre Destin, a litigation lawyer and literature professor with whom she had three children: Demesvar Darlyns Destin, Orlane Destin, and Ralph Destin. Her incredible work ethic and exceptional discipline allowed her to juggle a plethora of rather extensive responsibilities, including caring for her family, leading her company, and maintaining her countless social and professional relationships. Though life's hardships eventually began to surface in earnest, she never failed to assume her duties as a mother, daughter, siser, and friend, ensuring that the needs of those she cared for and loved were always considered, even after becoming terminally ill at a rather young age.
Darlyne truly embodied kindness and selflessness to those fortunate enough to have known her personally, socially, and professionally. She was a passionate mother, and an integral member of the countless circles she found herself in. She is survived by her husband, mother, and three children.

You Wish to Submit? 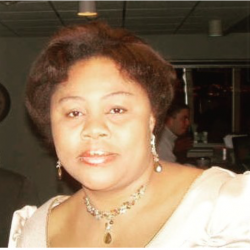