Jean-Frank Nicolas was born in Haiti on August 20th, 1922. He was born to Cavecien & Julie Nicolas. From a young age, Frank was a hustler, always looking for ways to make money. One of his first business ventures was reselling whatever he could get his hands on. He flipped watches, furniture, tv’s, gold chains, radios and made profits before his 18th birthday. He then took his profits and began investing into real estate while working at a supermarket. Aside from his hourly wage he was often tasked to liquidate any food that was nearing its expiration date, this became another stream of revenue for Frank. When he wasn’t at the the supermarket he used his income to resell various homes and land throughout haiti.
At 44 years old he married Estelle Dorvilmé Nicolas. She bore 6 children by the names Farah Nicolas, Waxson Nicolas, Franckel Nicolas, Eddy Nicolas, Markens Nicolas, and Natalie Nicolas. After their 4th child Estelle wanted to move to the United States for hopes of a better life. Frank did not want this. To prevent her from leaving he decided to open up Sony Bar & Restaurant in her honor for the family. The business was thriving, and the revenue from Sony Bar & Restaurant allowed them to open up another location for their franchise. Their Business brought a lot a popularity and wealth to their family.
Frank Nicolas was an exceptional father. He loved all his children. Estelle was responsible for education and discipline. Frank preferred to be the breadwinner and have lots of fun with his kids. He loved to play and watch tv with his children. Atleast once a month they would go on family trips. They traveled to the province of Fauché simply to enjoy each other’s company and eat plenty of fruit.
Throughout his life he always looked for new business ventures and he would do so until he wasn’t physically capable. Anything he put his hands on would turn profitable.
Jean-Frank Nicolas was an outstanding entrepreneur, he was an exceptional husband, he was a phenomenal father, who often supported members of his community financially. He was a man with a pure heart who never held on to grudges.
He is currently survived by his wife, six kids, and six grandchildren.

You Wish to Submit? 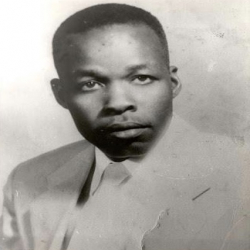